Climbing in Chiang Mai: Crazy Horse Mountain and many more

People visit Thailand for numerous different reasons: the food, the culture, the beaches, the mountains, the diversity. Others visit Thailand for the rocks. Rock climbing in Thailand has been a growing tourist appeal over the past few decades. Most climbers head south to Krabi or Railay Beach for massive limestone cliffs overhanging white sand beaches and crystal clear waters. Then there are the other climbers who head north to Chiang Mai for a quieter, cooler climbing experience.

Hidden amongst the bamboo forests and rice paddies lies a collection of cliffs waiting to be scaled. Climbing in Chiang Mai has only been a recent discovery, thanks to a small group of dedicated climbers. The Chiang Mai Rock Climbing Adventures Co. (CMRCA) was founded in October 2002 and has since been devoted to building the climbing community in Chiang Mai.

The Chiang Mai rock climbing movement started with The Chiang Mai Rock Climbing Adventures Co. (CMRCA). The firm is devoted to building the climbing community in Chiang Mai. With the help of the climbing community, the cliffs in Chiang Mai became protected. Moreover, the climbers often help the locals and introduce foreigners to the Thai traditions and culture. They collaborate with local companies such as the truck drivers and small restaurants. Instead of having climbers figure out their own means of transportation to Crazy Horse Buttress aka Crazy Horse Mountain, they offer a lift system which helps provide an income for locals.

People who live and work in the Chiang Mai mountains, want to preserve them for as long as they can. When the community started noticing all of the plastic water bottles left around Crazy Horse Mountain from climbers The Chiang Mai Rock Climbing Adventures Co. decided it was time for a change. They have installed free refill water stations around the climbing walls, hence in some places you can get a free refill when you climb.

All in all, there are several locations where you can do outdoor climbing in Chiang Mai, Crazy Horse Mountain is the most popular one, while Chiang Dao is the most remote and authentic one. Each of them has its own benefits and challenges.

A scenic drive twenty-five miles north of Chiang Mai will take you to Mae On Valley, home of the rock climbing in Chiang Mai. Crazy Horse Mountain, originally called Crazy Hot, is a collection of rocks with one of the largest boulders resembling a horse, hence the name.

Karisak Boonthip laid the first routes on Crazy Horse Mountain back in 1998. Shortly after, Chiang Mai Rock Climbing Adventures took over the development and upkeep turning the handful of routes into over two hundred different climbs.

The area surrounding the mountain has also grown, now providing shady bamboo huts and restaurants as well as a drinkable water system. Installed by The Chiang Mai Rock Climbing Adventures Co. the mountain has a free water refill system, which helps you find the nearest refill location using a phone app. The app’s name is REFILL and it is free to download. Your phone pinpoints your location by using the GPS system and the app then shows you all of the refill water stations in your area.

The difficulty of the climbs range from beginner to advanced with each route providing a different experience.Crazy Horse Buttress is comprised of 15 or so cliffs with heights ranging from fifteen to ninety meters tall. The cliffs offer a little bit of everything for climbers such from technical slabs to jamming cracks and multi-pitch roof adventures.

There is a restaurant at the base of the mountain that is open for daily lunches at a low price.

A short walk from the Crazy Horse Buttress will lead you to Aircon Wall. This has become a popular spot to climb during the peak hours of sunlight as it is close to the mouth of a cave which provides shade and a nice breeze.

Most of the climbs here are short and steep with some sharp rocks in places. Most of the times you can do Aircon Wall together with Crazy Horse Buttress.

As the name suggest, there is an archway to the far right of Crazy Horse Buttress. A short four-meter climb into the archway leads to routes on both the right and left side. The right-hand side is the Archway South and the left-hand side is the Archway North. The archway provides protection from the elements allowing guests a chance to climb in the rain or sun. It is also a nice place for lunch or an afternoon nap.

The furnace provides quite the mountain climbing adventure. A short walk from the parking lot, the furnace faces south and thus the sunshine bombards the wall all day long. Despite the heat, the climb is consistent and fun as well as a challenge for climbers.

The Ant Hill is a collection of six routes on a thirty-meter overhanging limestone cliff. The routes actually fall in a monk’s backyard giving the space an even more quiet and peaceful atmosphere. There are caves surrounding the base of the routes providing a cool breeze. There are ants in the area so if climbing with food it is best to keep it hidden and packed away. Bees are also present along the wall so it’s smartest to stay out of their way.

The Anxiety State Crisis Cave is a very different type of climb. Also known as Tham Wiung Fah, the massive cavern excites the adventurous types looking to try something new. Those brave enough to try this crazy rock climbing adventure must have a bit of experience and the proper equipment.

Chiang Mai Rock Climbing Adventure originally explored the cave back in January 2009. They returned in April of the same year on a thirty-three-hour trip to reach the deepest part of the cave at more than two-hundred and fifty meters.

In April 2015, they began their first guided tours of the cave. One can access the cave from an entrance near the Air Con wall. The route is just inside the cave and offers insane exposure. You can also climb up and enter from the top descending 70 meters into the cave. Entering from the mouth of the cave is a steep descent along the left-hand side. There are several different chambers and passages in the cave that carry you over slick boulders. At some places, rock climbers must scramble on hands and knees through the dark crevices of the cave. You will need helmets and lights for this adventure.

Heading even further north of Chiang Mai sits the Chiang Dao National Park. Inside the national park is Doi Chiang Dao, one of the highest peaks of Daen Lao Range on the Thai side. The Chiang Dao National park is popular for its secluded and beautiful summit and for bird watching. It is one of the most visited spots in Thailand for bird watching with over three hundred different species of birds. There are also caves and hot springs nearby. 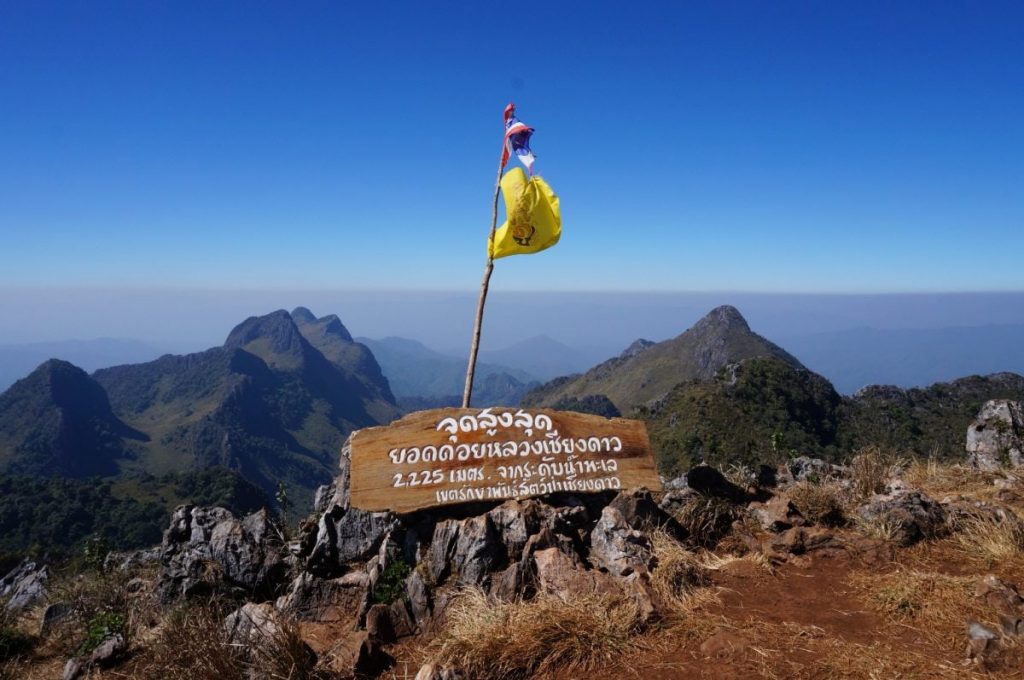 Doi Chiang Dao is a stunning limestone mountain that was discovered by Mountain Design in July 2007. The Chiang Dao area has a total of 25 routes. They provide climbs for beginners starting out as well as intermediate and advanced climbers.

Chiang Mai Rock Climbing Adventure Co. has capitalised on the growing rock climbing sport in northern Thailand. One of the originators, Josh Morris, was living in Chiang Mai in 2001 as a local climber. He travelled to the United States with his partner Kat to climb, explore and train. It was shortly after their trip that they decided to open a climbing company in Chiang Mai.

They built up Crazy Horse and are delighted to see it grow from a few simple routes to over one hundred. The staff at Chiang Mai Rock Climbing Adventure was feeling a little down when they weren’t able to climb as often due to booming business. They decided to build a bouldering wall at their office to solve that problem. The Chiang Mai Climbing Club was created in April 2004.

The bouldering wall is twenty-four meters fun and ever changing routes for beginners to learn on and for advanced climbers to practice their skills on. The gym is a safe and comfortable place for the staff and visitors to have fun and explore the world of climbing.

They offer one-day passes or month long memberships for those staying around a little longer. Chiang Mai Rock Climbing Adventure Co. are the only climbing company in Chiang Mai that offers guided climbs and gear for purchase or for rent. The other unique thing that they offer at the climbing club is the chance to find a climbing partner. There is a bulletin board with postings from people passing through the area searching for someone to climb with.

John Morris has strived to provide the locals with a chance to better themselves by encouraging them to further their education in the climbing world. Certifications such as Wilderness Advanced First Aid from the Wilderness Medical Associates place John’s staff a notch above the rest. They are knowledgeable and excited to share what they know with visitors of Chiang Mai.

One very special person in their family has been around since the very beginning. He is fondly called Uncle and has been a presence at Crazy Horse Buttress through it all. Loong Nan is a sixty-something-year-old Thai man who looks after Crazy Horse as if it was his baby. He is found working to repair bamboo huts near the base of the mountain or clearing the paths of debris. There is never a day that goes by that he is not there looking after things.

They also host a yearly Crag Clean Up Day in which the staff and volunteers spend the day in the mountains helping to maintain the trails, pick up trash and build belaying stands. After lunch, they spend the afternoon climbing together and enjoying each other’s company. Overall, CMRCA is dedicated to providing a safe, clean and enjoyable climbing experience.

No Gravity Co. is an indoor rock climbing gym located in Chiang Mai. While they do not offer an outdoor route or tour, they do provide an alternative climbing atmosphere. Opened in April 2013, No Gravity allows people a chance to explore climbing and see if it’s right for them.

The gym has routes as high as twelve meters and over 370 square meters of climbing space. The routes vary in difficulty with some going straight up and down. While others have obstacles throw in for an added challenge. They teach you the basics of how to belay and secure your ropes. If you are visiting for a day they provide one-day tickets. However, if you live in the area they offer one, three or six-month long memberships.

There are also different courses provided for top rope and lead climbing. No Gravity is a good place for beginners to learn about safety rules and proper use of equipment. After you are done with the basic skills you can head out to the walls in Chiang Mai.