What’s not to like about the fusion of the glorious mountains and marvelous seaside? It is indeed very rare to come across a place that is both historically significant and esthetically attractive. As within the past few years overcrowding of the popular tourist destinations became a major issue, tourists began to look for hidden gems in less known places around the globe. Surprisingly, these unknown and undiscovered locations promise more adventure, excitement, and fun for travel enthusiasts.

One of the most underrated and unexplored places worldwide lies in the Caucasus region, the country of Georgia. However, during the past decade, Georgia has been receiving much more attention than ever. The country was named as the Best Destination in Europe several times and as the top Cultural destination globally quite a few times, as well. The increasing popularity of Georgia comes from the fact that within a short period, the country managed to fast forward the economic, infrastructural, and technological development. Georgia offers numerous tourist attractions that are worth visiting and exploring. 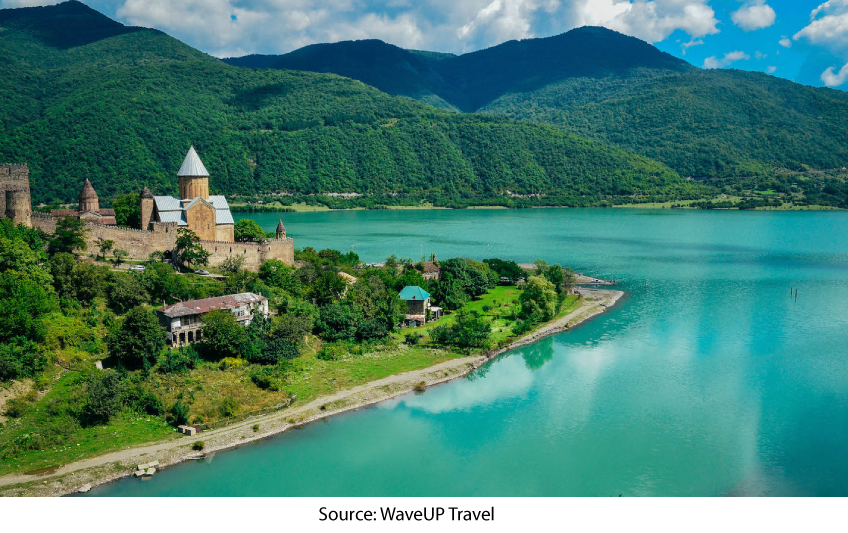 Georgia is a small country located on the merge of Europe and Asia. Representing the best of both worlds, Georgia stretches between the breathtaking Caucasus mountains and the spectacular Black Sea.  Due to the country’s fascinating diversity, it attracts all sorts of tourists be it a young and free-spirited mind, a business enthusiast, a history geek, or a culture fanatic. What comes first to mind when mentioning Georgia to tourists? it’s the exclusively delicious cuisine, ancient history dating back to the 13th century BC, unique and unmatched culture, and the warmest and the most hospitable people in the whole region.

What remains today in the modern country of Georgia evolved over many, many centuries with the roots in the Iberian and Colchian civilizations. From its foundations until today, the Georgian community went through the renaissance and golden age of classical literature, arts, architecture, and even science. One of the notable features of Georgia is its unique spoken and written language with its own unparalleled alphabet dating back to the 5th century BC. The Georgian language does not belong to common linguistic groups as it was formed on its own and belongs to the Kartvelian (Georgian) linguistic heritage. 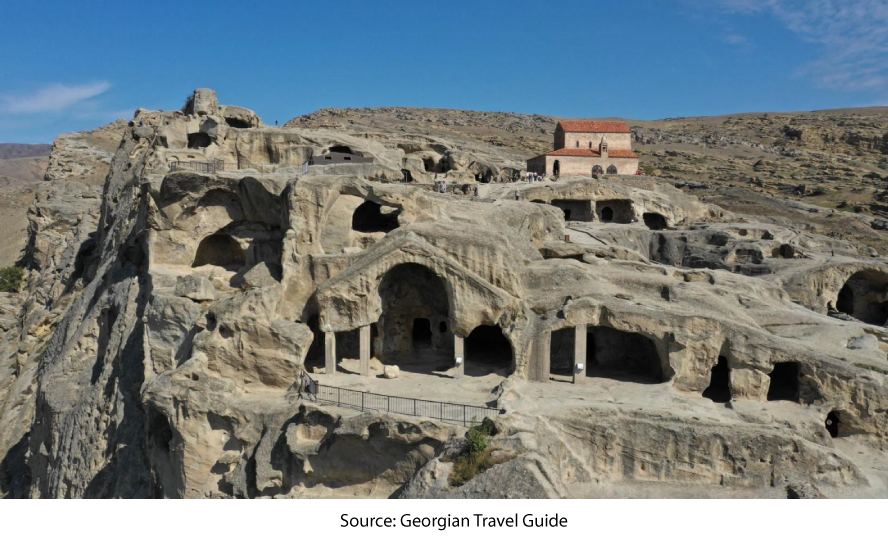 Being one of the most ecologically diverse countries on the Earth, Georgia is extremely proud of its marvelous sights that attract millions of tourists annually. The country has twelve different climate zones that range from subtropical to alpine to semi-desert. Thanks to the ecological diversity, Georgia can offer over a hundred resorts that present various climates and landscapes characteristical to their own natural habitat. That is why, tourists can enjoy swimming in various lakes, rivers, or the Black sea in Georgia with numerous beaches resorts, alpine climbing to the highest mountains in the region, or skiing at the highest altitudes in the Caucasus. Furthermore, Georgia is home to more than 2000 mineral springs that make it one of the most attractive destinations for medical tourism. There are over 12 thousand historical and cultural monuments and many of them are even recognizes as the World Heritage Sites of UNESCO. 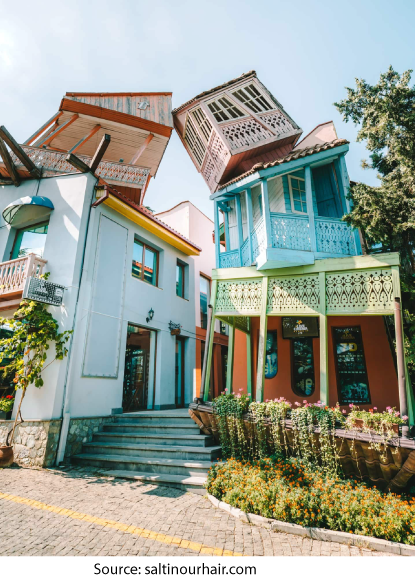 Maybe the most interesting location of the country is its capital city of Tbilisi that is undescribable in a single word or phrase. Tbilisi is a perfect mix of antiquity and modernity and frequently it is referred to as the city of contrasts. Walking down the streets of Tbilisi, one will come across the fascinating old town, very old and attractive Sulphur bathhouses, traditional carved wooden balconies, and modern, glass skyscrapers. With numerous museums, galleries, vintage cafes, and vibrant street art, the city is indeed one of the most dynamic and spirited places within the region. Tbilisi was also named as the 2nd Berlin for its loud nightlife culture and lively weekends with performances from both local and global artists.

The cuisine of the Year

In 2019, Georgian cuisine received an award of the cuisine of the year. However, it has long been known that the food in Georgia is distinctively delicious and unique in its origins. Similar to many other traditions and culture of the country, Georgian cuisine has been involving through many centuries, adapting traditions in each period and finally transforming into the most diverse kitchen worldwide. You can taste a lot of different local dishes including authentic pastry, salads, various sorts of meats, walnuts, and endemic vegetables and fruits.

The Cradle of Wine

It is not a secret that Georgia is one of the oldest wine regions in the world (maybe the most ancient one, as well). Eventually, most of the wine lovers in the Caucasus end up in Kakheti, Georgia to get acquainted with the history of wine-making dating back to 6000 BC. For a country that small it is incredibly surprising to observe 54o endemic varieties of grapes growing on its territories. The country distinguishes itself with the most diverse wine palette, where anything could be tasted from sweet, semi-sweet, semi-dry, dry, fortified, or sparkling wines. Now we understand why the local community celebrates each and every occasion with an accompaniment of wine and Georgian people sure like to drink! 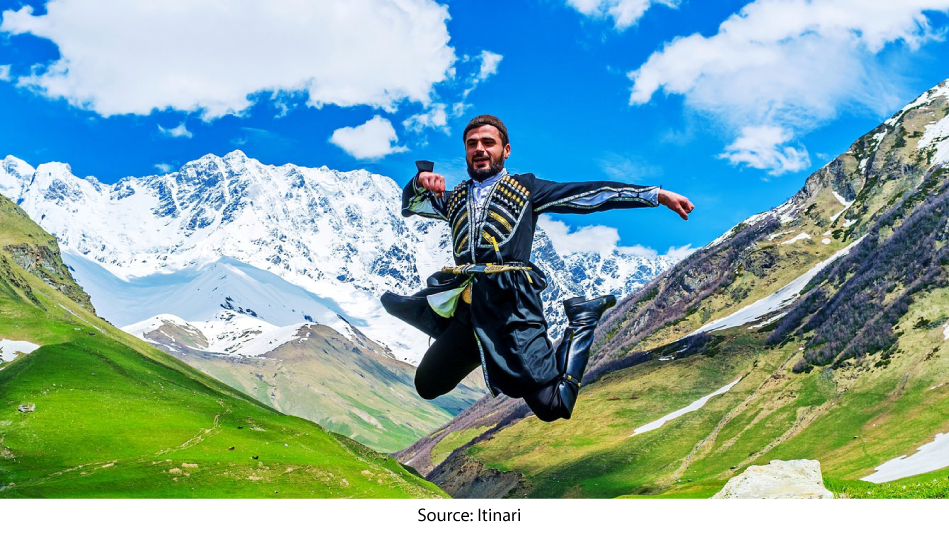 Did you know that Georgian polyphonic music ended up being sent in space by Golden Records? the reason for that is a rich and vibrant style of the traditional music produced in the country. Georgian Folk culture is recognized as the oldest polyphonic tradition in the Christian world. The acapella tradition is characteristical to each and every region of the country which makes the music extremely diverse itself. All of the regional folk masterpieces are predominantly vocal with their astonishing vocal polyphony.